(i) Each contestant solved at most six problems.

(ii) For each girl and each boy, at least one problem was solved by both of them.

Prove that there was a problem that was solved by at least three girls and at least
three boys.

For each girl and each boy, at least one problem was solved by both of them. It would be convenient to talk of the problem solved by a particular girl and boy, but there may be more than one. To get round this difficulty, for each pair of boy and girl, we select one of the problems which they both solved, and call it their special problem. Notice, by the way, that we have to do this for all $21 \times 21 = 441$ pairs of kids of different gender.

We now proceed by contradiction. We assume (hoping to obtain an absurd conclusion) that every problem is male or female (or possibly both). We now look at each of the 441 boy, girl pairs in turn. For a given pair, if their special problem is female, we associate the letter $F$ to this pair. If it is not female, then this problem must be male but not female, and we associate the letter $M$ to this pair of children.

Each one of the 441 pairs is now associated to a letter $M$ or a letter $F$. There are an odd number of pairs, and so one of the two letters must be in the majority. Suppose that it is M. If that is wrong, the argument will be exactly the same, exchanging girls with boys and $M$s with $F$s. We can say “without loss of generality, the letter M is in the majority” because it doesn’t matter which letter is in the majority, the argument will proceed unhindered, by swapping sexes.

This is the “absurdity”, or “contradiction”, that we were seeking. Therefore there is a problem which is neither male nor female, and so was solved by at least three boys and at least three girls.

Answer: $\lfloor\sqrt{n-1}\rfloor$ (the brackets refer to the floor function, that is, the integer part of $\sqrt{n-1}$)

(i)  Assume that $n > m^2$. Consider any peaceful configuration. There exists a row $R$ containing a rook in its leftmost square. Take $m$ consecutive rows with $R$ being one of them. Their union $U$ contains exactly $m$ rooks. Now remove the $n – m^2 \geq 1$ leftmost columns from $U$ (thus at least one rook is also removed). The remaining part is an $m\times m^2$ rectangle, so it can be split into $m$ squares of size $m\times m$, and this part contains at most $m-1$ rooks. Thus one of those squares is empty.

(ii)  Now we assume that $n \leq m^2$. Firstly, we will construct a peaceful configuration with no empty $m\times m$ square for the case $n = m^2$. After that we will modify it to work for smaller values of $n$. 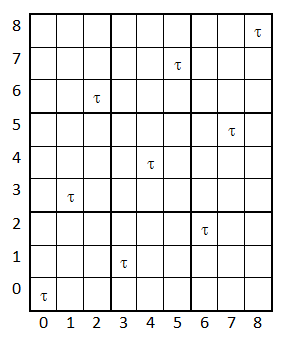 Next, we show that each $m\times m$ square $A$ on the board contains a rook. Consider such a square $A$, and consider $m$ consecutive rows the union of which contains $A$. Let the lowest of these rows have number $pm+q$ with $0 \leq p, q \leq m – 1$ (notice that $pm+q \leq m^2 – m$). Then the rooks in this union are placed in the columns with numbers

or, putting these numbers in increasing order,

It remains to construct a happy configuration of rooks not containing an empty $m\times m$ square for $n \leq m^2$. In order to achieve this, take the construction for an $m^2\times m^2$ described above and remove the $m^2 – n$ bottom rows together with the $m^2 – n$ rightmost columns. We will have a rook arrangement with no empty $m\times m$ square, but several rows or columns may happen to be empty. Clearly the number of empty rows is equal to the number of empty columns, so one can find a bijection (a one to one mapping) between them, and put a rook on any crossing of an empty row and an empty column corresponding to each other.